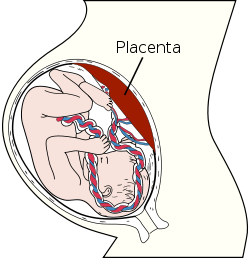 In my Prepared Childbirth Class, during our discussion of the birth plan with the pregnant couples, we tackle possible options they want to happen in their births which they will then discuss with their obstetricians. One of the more interesting topic we talk about is the possibility of cutting the umbilical cord by the husband after the birth of his baby. This comes as a surprise to many of them since they never thought that this could be a possibility while some squirm at the thought of it. I think maybe it is because of the thought of the blood gushing out from the cord after it is cut or perhaps the pain and injury they fear they may inflict on their newborn and/or their wife. I quickly assure them that the cord is first clamped a few inches away from the baby before it is cut and that the cord has no nerves in them, thus mother and infant will not experience any pain when it is cut. Many of them feel assured, but by the looks on their faces, many of the fathers still seem doubtful whether they will be brave enough to do such courageous act when the times comes. There are still a few others who feel they are confident enough and are sure they want to do it. Some how there seems to be some honor and pride in being able to say, “I cut my baby’s umbilical cord.” My oldest daughter who was in one of my births cut her sister’s umbilical cord. Believe it or not, I cut my daughter’s cord on my last birth and boy was it tough!

Recently I was asked in class the question regarding the early cutting of the umbilical cord. The couple said they researched on it and have read a couple of things about its negative side effects to the newborn. I quickly remembered what a pediatrician once told me a few years back about the effects in the delay in my request in cutting my baby’s umbilical cord. She said it was one of the reasons why my baby developed jaundice. I was very curious about her comment and wondered about it in my mind. I did not know if I believed it or not, but since she was the doctor, I just left it at that. I wondered how our grand mothers gave birth in the past and how their umbilical cord and placenta were handled. My student’s question opened a can of worms and I determined to investigate some findings about this matter. If they were implying to request this from their obstetrician as a possible option, I needed to site to them some findings to back them up since I myself am a firm believer in the naturalness of birth.

During second stage when the baby is born, the doctor waits for the baby to cry to take his first breath from his lungs, then she would immediately cut the umbilical cord. This is the common practice here today. In the uterus the fetus has been getting adequate oxygen supply all throughout the pregnancy from its umbilical cord whose other end is attached to the placenta. It is correct to state that the newborn is retrieving his blood supply from his placenta which happens to be attached in his mother’s uterus rather than to think that he is actually receiving blood from his mother.

After the birth of the baby, the umbilical cord continues to get blood from the placenta allowing him to transition from his capsulized bag of water to the outside world where he starts to breath on is own using his lungs. When the transfer of blood from his vein is completed, the blood vessels shot down and the placenta detaches itself voluntarily. In the past our grand mothers would just leave the umbilical cord and placenta attached to their babies wrapped on a diaper until it would dry up and fall off on its own. The birth was more gentle and unrushed.

Here are a few things I’ve gathered from my research regarding delayed umbilical cord stripping that can be done for a healthy normal birth that is free from complications.
By George M. Morley, B, July 1998 * OBG Management. “While exploring the feasibility of saving placental blood for autologous NICU transfusion, the author found a disturbingly obvious alternative: If cord clamping is delayed to permit normal placental transfusion, the need for newborn transfusion often could be eliminated.
The debate on cord clamping dates back at least to 1801, when Erasmus Darwin noted that it would be "very injurious" to tie "the navel-string" too soon and urged that clamping be delayed until the infant has breathed repeatedly and all cord pulsation ceased. The cord tie is viewed as insurance against blood loss after the vessels have closed.”
In 1993, a study by Kinmond et al…“found no increased jaundice, plethora, hyperviscosity, or polycythemia using this method. Yet fear of late clamping persists because physicians have been conditioned to believe that these complications are caused by placental over-transfusion. Cord stripping has become tantamount to malpractice.”

In Wien Klin Wochenschr. 1985 May 24;97(11):497-500. [Article in German], Hohmann M. States that…“Late cord clamping allows a redistribution of placental blood to the fetus within 3 minutes…Blood volume and blood pressure of the fetus are elevated after placental transfusion. The increased blood volume correlates with the effective renal blood flow. There is no difference between cardiovascular parameters 6 hours post partum in infants subjected to early or late clamping of the cord. Nevertheless, erythrocyte volume and oxygen capacity remain high during the first days of life in infants with late cord clamping. Conclusion: In normal deliveries the cord should be clamped after 1 to 2 minutes. In premature infants, however, placental transfusion is advantageous because the incidence of respiratory distress syndrome is lower with late clamping.”
In Z Geburtshilfe Perinatol. 1982 Apr-May;186(2):59-64. [Article in German] Künzel W. States that…“From the historical point of view, cord clamping has been performed in natural child birth some time after the fetus has been delivered and after the expulsion of the placenta. In 1877 already Hayem could show that in late cord clamping (LC) the concentration of erythrocytes in the newborn blood is elevated if compared to early clamping (EC) of the unbilical cord. It was concluded that this  was a result of placental transfusion…The newborn responds to placental transfusion with an increase of hemoglobin and hematocrit, an elevated blood pressure, although significant differences in cardiac output could not be established. Renal function is increased and effective renal blood flow associated with the blood volume of the newborn…In conclusion: "In order to give the newborn the blood, that it needs physiologically cord clamping should be performed not immediately after birth, but one should wait as long until the umbilical vein has been empty and is collapsed." (Bumm 1902).”
Today the umbilical cord is know to have a rich supply of stem cells which could be collected and harvested for future use to restore bone marrow back to the deficient child and experiments continue to discover many other uses for the stems cells. I think, if the birth of a baby is uncomplicated, the mother must be allowed to let her newborn rest in her caring arms and delay cord clamping to maximize the benefits of the fresh source of blood and stem cells. This should be done safely for as long as it is medically possible and neither of their health are compromised.
Other interesting readings to support delayed clamping:
1) George M. Morley, B "Cord Closure: Can Hasty Clamping Injure the Newborn?", OBG Management - July 1998
2) Z Geburtshilfe "Cord clamping at birth - considerations for choosing the right time" Perinatol 1982 Apr-May;186(2):59-64
3) Saigat, Saroj, et al. "Placental Transfusion and Hyperbilirubinemia in the Premature" PEDS 49:3 – March 1972
4) Walsh, S. Zoe "Maternal Effects of Early and Late Clamping of the Umbilical Cord" LANCET – 11 May 1968
5) De Marsh, QB, et al "The Effect of Depriving the Infant of its Placental Blood", JOUR AMA ? 7 June 1941